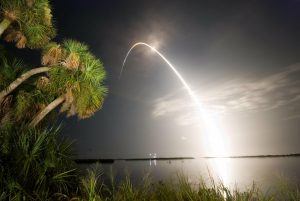 The physicist, Professor Geraint Lewis from University of Sydney in Australia has stated that Warp Speed is Possible and it will happen in the next 100 years. He explains how you can warp spacetime around a ship and that bending spacetime was part of Einstein’s theory of relativity calculations.

He feels that we need to find the materials necessary that would have negative density energy for the concept to work. Negative energy mass has been shown to exist in the laboratory by scientists specializing in this area but it is very small quantities. Basically Lewis argues theoretically that a drive allowing the warping of space is possible.

The part that is seriously open for debate is about finding the materials needed that would allow you to build such an engine.

According to ABC News who interviewed Lewis, he pointed out: “If you look at the equation that Einstein gave us, it shows you can bend and warp space so you can travel at any speed you like in the universe. It’s theoretically possible, but can we build a warp drive? We have hints that the kind of materials that we would need exist in the universe, but whether or not we could get them together and build a warp drive, we still don’t know.”

Lewis points out and I agree with him, that without warp drive super fast interstellar space travel, then colonizing the universe in neighboring star systems and beyond is unlikely to happen. Meaning that humanity would be doomed to being stuck in this solar system or perhaps only migrating out to the closest systems and even that would be a very slow process.

In other words as I have said else where on this site, the Holy Grail is a Warp drive, you need a warp drive for travelling realistically across star systems and perhaps even our outer solar system, to effectively cover the vast distances.

He continues stating the following: “The big problem we have, the speed of light, while fast – 300, 000 kilometers per second – the distances involved are immense, so even travelling at the speed of light, it would take four years to go to the nearest star and two million light years to go to the nearest galaxy. These distances would stop you colonising the universe… so you would need some sort of way to beat that speed limit, and Einstein’s theory of relativity gives it to you.”

The Professor says and of course it is not rocket science, if you want to travel interstellar distances or even the outer solar system here, we are going to have to abandon conventional rocket thruster technologies and for sure an energy source of chemical rocket fuel is not up to the job.

In order to build something like a warp drive engine, you would need a material that has a negative energy density. Exotic negative energy has been shown to exist but only in very small minute amounts, such as the Casimir Effect.

This involves two plates in a vacuum that are placed very close together, and restrict the wavelengths of quanta which occurs between them. This causes a reduction in quantity and density of the virtual particle pairs which develop in the intervening vacuum, resulting in a negative vacuum density. This causes a force of attraction between the plates which has been observed.

This force however is very small and would not be enough to generate that required levels of negative energy required for a warp engine. You would need to come up with something that can generate very large amounts to be practical.

In the Star Trek universe they had a material called the Dilithium Crystals that was used to power the warp drive of the Enterprise. In the early days of the history of humanity in the Star Trek universe, this dilithium crystal material was a rare hard crystalline substance that could not be regenerated and would only occur in certain planets.

Would we need something similar to this concept?

Nature imposes strict rules on the magnitude and duration of negative energy. This means that for the construction 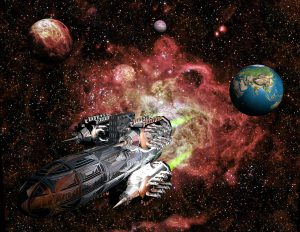 Professor Geraint Lewis commented that while we cannot build a warp drive today, perhaps in the future it could be possible if such a material could be discovered: “Its not a material that we actually have in our hands, but there are signs that there are aspects of the universe that actually have this kind of property.”

Space itself is not empty but has virtual particles of negative energy density that are bleeping in and out of existence of the quantum vacuum. The million dollar question is if we could potentially mine or extract it and mold it, then perhaps a working warp drive engine is possible.

Impossible or is it I’m Possible?

He pointed out that many concepts that are initially theoretical and even far fetched, end up being possible and science fact a 100 years or more after they were first suggested. Why is it so unrealistic that warp drive is possible?

As one CIA scientist said once on a BBC Panorama documentary series back in the 1990s, that what is science fiction today is always but always science fact tomorrow, when discussing about intelligent viruses that can communicate remotely with each other in separate physical hosts.

If you look at the work of Isaac Newton from 400 years ago, or even 100 years ago with those studying quantum physics back then, those ideas are all real today starting of as a theory or dream initially.

The Professor stated: “Einstein’s theory is already a hundred years old, but we have only started to scratch the surface. I think in the next 100 or 1,000 years we will reveal a lot more about the universe and maybe this hyper-fast travel will be realisable.”

Special relativity is a theory, exposed by Albert Einstein in 1905, saying that no object with mass can reach the speed of light. A couple of years following this, Einstein put forward his theory of general relativity, that contains various field equations that can be solved in various ways.